Loops are constructions, that allow us to execute one or several actions multiple times. They consists of two major parts: a truth condition and a body. The body contains the actions that we want to repeat. Each execution of the body block is called iteration. The condition decides whether the iterations will continue or not.

Imagine that you need a program that has to repeat something a million times! Would you re-write the same thing 1 000 000 times? Or you would rather use the simple construction of several blocks that do the repetition for you? Of course, the latter ;). See the example below, it is so simple, yet so powerful: Initially the program checks the condition. Lets say that it is true and we enter the body, where our actions are executed. Following the body we cycle back and do the check again. If it is still true, then the program will make one more iteration. Once it is false, the execution continues with the block following the loop (in the example above the algorithm ends).

The body could be as complex as we need it. We may create it to be very simple (for example only one action block) or we could put a series of different blocks.

Example: Print the numbers from 1 to 10.

In this short algorithm we will repeat the output and the increment of the variable iCounter. Once iCounter is not <= 10, the program completes.

Precondition means, that the check will be done before the body execution. Notice that such construction might quit before executing its body even once(zero iterations) if the condition is false the first time. The examples that we have looked at, so far are all with precondition.

They do the end-check after their body. Because of their structure they guarantee that the body will execute at least once.
There is no better or worse between pre- and post-. You decide which one to use, depending on the situation. Most times it doesn't matter, except for some very rare cases.

Example: Write a flow chart for an algorithm, that accepts 10 numbers from the user. Check whether each number is divisible by 7 without reminder. Use a postcondition. 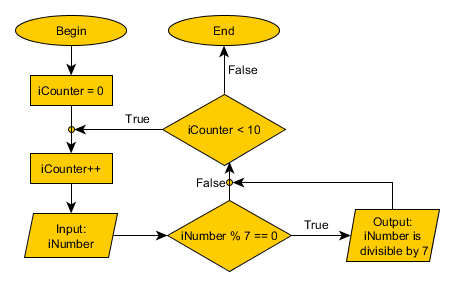 Normally we will continue to repeat the iterations while the condition is evaluated to true and stop when it becomes false. If this never happens it will have infinite number of iterations. Usually this happens by mistake and causes the program to crash, giving a “stack overflow” exception.

Example of such mistake is, if we miss to increment the iCounter variable in the above algorithms. In some rare cases we may want to create this kind of behavior. The easiest way to do this is to put the Boolean value true in the condition.

One way to use infinite repetitions is to quit the loop from within its body. We will look at this in another tutorial. 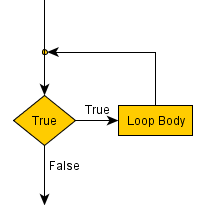 For instance, the examples above use the end condition iCounter < 10, because the number of iterations is 10. The same logic could be implemented with the check iCounter <= 9, but it is not as convenient as the above.

Write a program which: